My colleague Claire recently described how the static load test can effectively pick out trees with significant root stability issues, particularly in the context of construction and development sites. An opportunity was taken to undertake a destructive test on the tree described, given that the static load test clearly showed that the tree would need to be removed.

The data collected from a destructive test can be used to verify the generalised tipping curve against which all trees are assessed within the model developed by Lothar Wessolly. The generalised tipping curve proposes that at 0.25ᵒ root plate inclination, 40% of the maximum load required to continue to pull a tree over is reached. The destructive test carried out on T20 supports this relationship very clearly.

A maximum force of just over 6 kN was applied during the destructive test. 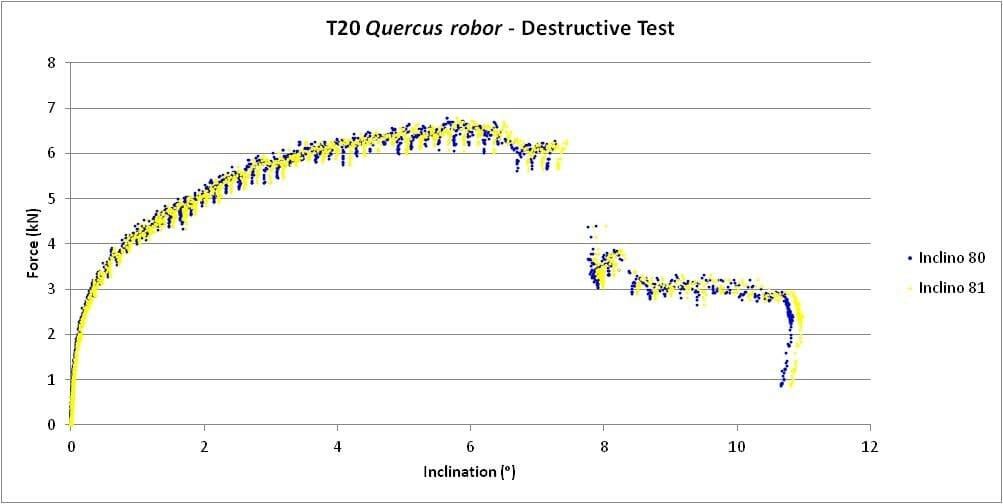 The winch load was applied until a root plate inclination of just over 10ᵒ by which point only 3 kN was required to keep pulling the tree over. A woody root clearly broke at around 8ᵒ inclination.

Re-plotting measured force as a percentage of the maximum force applied generates a typical curve demonstrating that for the tree tested 0.25ᵒ root plate inclination is indeed reached with 40% of the maximum force required to continue to pull over the tree. This relationship is broadly true regardless of tree species or soil type because it is a proportional one; 0.25ᵒ may be reached at 40% of a small maximum load, or at 40% or a large maximum load. 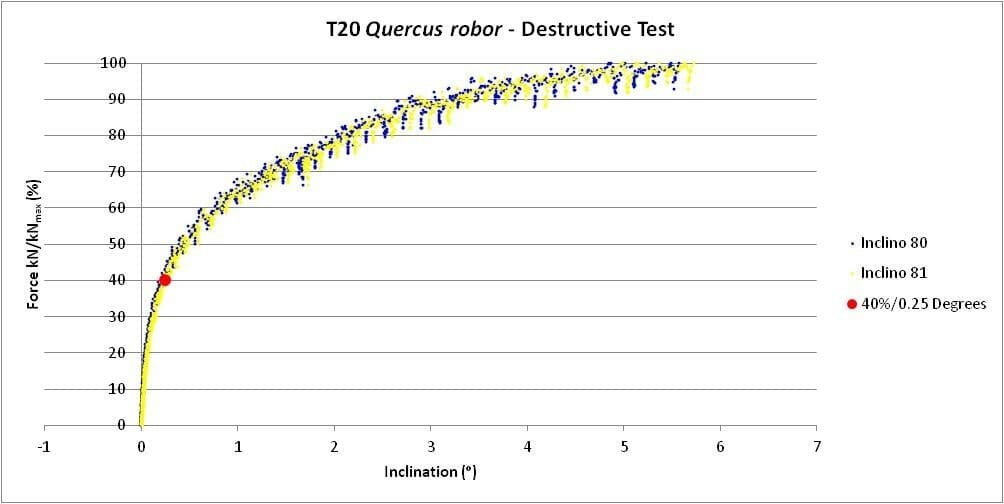 The soil cracking at the end of the destructive test shows that once these signs of root plate movement are visible, a tree’s root stability is severely compromised. But the measured data shows that root damage will have occurred way before soil cracks become visible.

During a static load test we do not exceed 0.25ᵒ root plate inclination. For most large trees we stop the test at between 0.05ᵒ and 0.15ᵒ. So the test is non-destructive. Applying this model we can confidently assess the stability of a tree without damaging roots and without excavations. 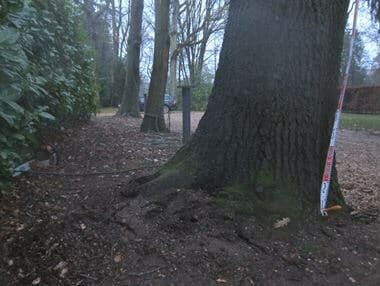 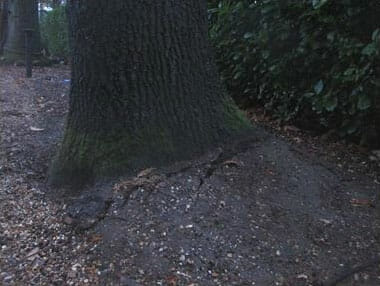 Treework Environmental Practice have been offering static load tests to guide the management of problematic trees since 2004 and have completed tests on over 200 trees throughout the UK and in Europe. The level of confidence provided by the data collected and the assessment of a tree using the statics model has generally allowed Treework Environmental Practice to recommend the retention of client’s trees with a high level of confidence. Of course the data can also be used to justify decisions to remove trees when strength loss is shown to be extremely high; the evidence is available to demonstrate why a tree is being lost.

This destructive test was made possible by Ross Fountain of Reeves Arboricultural Services http://www.reevesarbservices.com who worked in the rain and into a dark evening to collect the data required.

The data has been sent to Steffen Rust at HAWK University, Hildesheim in Germany to create a large data set that is being used to support and develop both statics and dynamic modeling of trees.